In the previous post, we started our discussion on the partitioned guided improvement algorithm (PGIA). We covered some background information, an interesting idea our group developed, and how it fails for problems with more than two objectives.

In this post, we’ll conclude our discussion on PGIA. We’ll extend the algorithm for any number of objectives, cover an example problem with three objectives, and finally, discuss preliminary results and future work.

At this point, I will assume familiarity with multi-objective optimization, the guided improvement algorithm, and the previous post on PGIA. This post is likely the most difficult one in my blog series, so please feel free to ask questions in the comments.

When we concluded the previous post, we investigated the reasons why PGIA only worked with two objectives: dominating a locally optimal solution requires finding a solution in the “empty” region.

The problem with three or more objectives is that we cannot easily make this guarantee.

Let’s look at the regions directly “adjacent” to the empty region, that is, regions with exactly one “worse than” constraint. The following argument will be the same for all N of these regions, so we’ll simply consider the region with constraints (<p1, ≥p2, …, ≥pN), where the remaining constraints are ≥pi.

For any given solution within this region, a dominating solution exists if we improve at least one of the metrics (and satisfy the problem constraints)1. If we increase only the objectives m2, m3, … mN, we will remain in this region. In contrast, if we increase m1, we will eventually reach a different region, the one described by constraints (≥p1, ≥p2, …, ≥pN).

The same argument applies to the other regions with exactly one “worse than” constraint. Since all these regions are independent2 and do not overlap each other, we can search them in parallel.

Suppose we have gone and found all locally optimal solutions in the N regions with exactly one “worse than” constraint. We know that these solutions are globally optimal.

Our algorithm now has multiple steps with dependencies, which will require sequential processing. However, we have still broken the problem into smaller pieces, and we can still perform some of the searching in parallel. We just cannot search all 2N regions in parallel.

An optimization and some more notation

We can create a dependency graph that illustrates which regions we can search in parallel. However, our current notation is a little difficult to work with, so we’ll use binary strings, similar to how our implementation uses bit sets. The binary string b1b2…bN, represents a region (■p1, ■p2, …, ■pN) where bi is 1 for “better than or equal” constraints and 0 for “worse than” constraints.

Our dependency graph will be a directed acyclic graph where each vertex represents a region, and an edge directed from R to R′ means R is a dependency of R′. In other words, we need to search in R before we can search in R′, because a solution in R might dominate a locally optimal solution in R′.

For a problem with N objectives, our graph will have 2N vertices, where each vertex is labelled with a binary string of length N. A directed edge from R to R′ exists if and only if R′ is the same string as R, but with exactly a single 1 changed to a 0.

Let’s examine why this works. Suppose the 1 we changed to a 0 corresponds to the digit bi, which represents metric mi,. The edge from R to R′ means R is a dependency of R′, or that a solution in R might dominate a locally optimal solution in R′. Assuming we can satisfy the problem constraints, we can find this better solution in R by taking the solution in R′ and setting mi to be greater than or equal to pi.

An example problem with three objectives

To visualize how this algorithm works, we’ll walk through an example problem with three objectives. This example problem is based on the one from the previous post, but slightly modified for demonstration purposes.

First, we’ll consider all existing solutions, even non-optimal ones. We will assume that the first Pareto point, P = (10, 11, 9), has already been found, and that we have already split the space accordingly. This time, the regions are labelled with binary strings instead of letters.


The dependency graph for this problem is shown below. For completeness, I have additionally included the vertices for 111 and 000, even though we skip them in the algorithm.

The locally optimal solutions we discovered are also globally optimal, because any better solution from a different region must exist in 111, which is empty.

If we finished 110 and 101 first, the dependency graph indicates we can proceed to 100, even though we could still be searching in 011. This is because no solution in 100 can dominate a solution in 011, and vice versa. We could not make a metric better without making some other metric worse.

In 001, we find the solution (9, 8, 12), which is locally optimal and not dominated by the known solutions. Therefore, it is globally optimal. 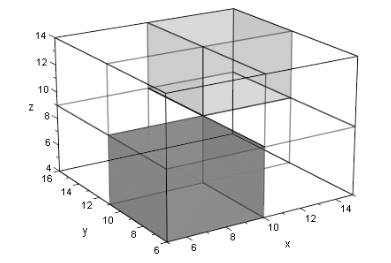 I plotted this graph with MATLAB (specifically, MuPAD). The code is provided below, and I have also included the code for plotting the solutions.

Our group has implemented both the algorithm and the optimization described above. I will not be discussing the implementation this time5, but you can find the code on GitHub.

With our implementation, we have been able to run our preliminary tests. Below, we have a graph and a table comparing incremental solving (IGIA), checkpointed solving (CGIA), the overlapping guided improvement algorithm (OGIA), and PGIA. 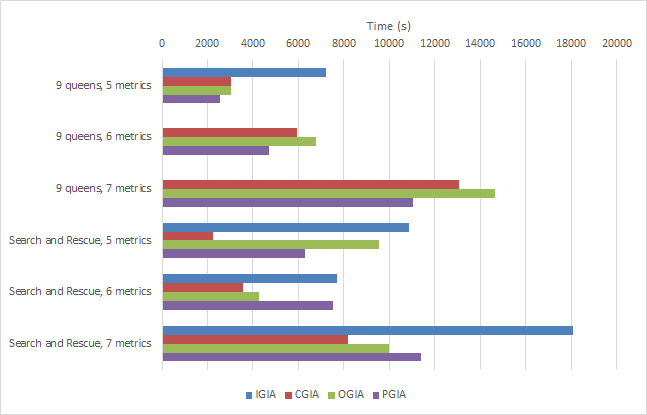 In the graph, lower numbers are better, indicating that less time was spent solving the problem. Also, note that two of the queens problems are missing a bar for IGIA; for one of them, we never attempted the test, and for the other, the bar distorts the entire graph because it is so large. The original GIA results are not included, since we are now comparing our algorithms against IGIA. Finally, recall that these are informal test results, run on the undergraduate computer science servers.

However, when we tried some of our extremely large tests, CGIA and OGIA fell behind7.


We suspect this extremely poor performance is because the rooks problems have fewer constraints than the queens problems. Thus, there are far more solutions to find, and PGIA can better handle this situation. However, it’s important to note that these problems are extremely large and contrived, which we likely won’t see with real world problems.

At the time of writing, we are interested in three further improvements to PGIA.

The first, similar to OGIA, is to build PGIA on top of CGIA. Again, we would need to look at reducing memory usage first.

Next, we could recursively split the regions. To keep things simple, our first implementation only splits the space once, and uses regular GIA within each region. We’re interested in what happens if we continue splitting the regions and making them smaller. However, we probably want to limit the number of recursive calls, otherwise there will be too much overhead.

In this post, we concluded our discussion of the partitioned guided improvement algorithm. We had previously discussed the background and inspiration for PGIA, and in this post, we completed the algorithm and walked through an example execution. The algorithm is far more complicated than OGIA, but it guarantees no duplicate solutions.

At this point, the blog series has covered all the work our group has accomplished so far. I have no further blog posts planned for this series, as they will depend on what our group works on, from now until March 2014. However, potential topics include the results of our further investigations, or results from rigorous performance evaluations.

Thank you for reading this blog series. I hope the posts have been informative and interesting, and that it was worth your time. If you still want to learn more, you can look at our documents and repositories, or contact me.

I would like to thank Talha Khalid, Chris Kleynhans, Zameer Manji, and Arjun Sondhi for proofreading this post.